Seeing Red begins with a brutal, violent incident that happens at a house party the narrator, Lucina/Lina, is attending with her partner:

And then a firecracker went off in my head. But no, it was no fire I was seeing, it was blood spilling out inside my eye. The most shockingly beautiful blood I have ever seen. The most gorgeous. The most terrifying. The blood gushed, but only I could see it. With absolute clarity I watched as it thickened, I saw the pressure rise, I watched as I got dizzy, I saw my stomach turn, saw that I was starting to retch, and even so. I didn’t straighten up or move an inch, didn’t even try to breathe while I watched the show. Because that was the last thing I would see, that night, through that eye: a deep, black blood.

Her other eye begins to fill with blood soon after and by three a.m. ‘even the most powerful magnifying glass wouldn’t have helped me’. The only compensation is that the following morning Lucina finds the blood in her left eye has sunk to the bottom leaving a slither of light.

In simple terms, what follows is the narrator’s attempt to come to terms with what is happening to her. Of course, the changes that will be wrought in her life are anything other than simple. 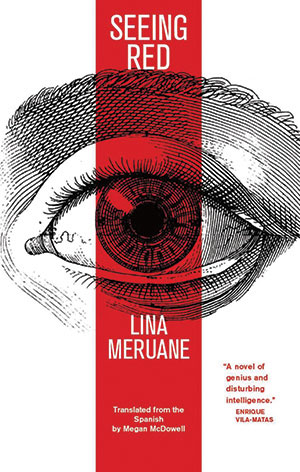 The ophthalmologist tells her that she’s ineligible for an experimental transplant and all that can be done for now is ‘to just keep an eye on it’. If the worst happens, he concludes ‘we would have to see’. Lucina is furious.

We follow Lucina as she begins to negotiate her terrain by learning to count the number of steps between places, by attempting to rely on her other senses which sometimes fail her, by having to rely on her partner, Ignacio.

Some of the chapters are bracketed and written directly to Ignacio, detailing the way in which their relationship is changing:

And you were there, and it was as if you were one-eyed, too, you couldn’t understand what had happened. You couldn’t calculate the gravity. You couldn’t bring yourself to ask the questions. You balled them up and stuffed them, like now, in your pockets.

Meruane explores the impact of forced dependency on an independent, ambitious woman. Lucina progresses from telling Ignacio, ‘I am only an apprentice blind woman and I have very little ambitious in the trade’ to telling her mother, ‘I don’t know if I’m going to get better. I have to learn how to be blind. You’re not helping’. These two relationships, with her partner and her mother, are the key ones in her life and, almost inevitably, the ones which take most of the strain. As the book progresses, Lucina becomes angrier and the narrative more violent.

The tension that builds throughout the novel is aided by the short, flash fiction style chapters and the intensity of Meruane’s use of language and grammar, superbly translated by McDowell. Sentences are short and spiky, they cut off before they are finished. Words are picked up and played with, repetition and association are used to brilliant effect.

I spoke to Lina Meruane about autobiographical writing, family relationships and women in translation.

My review of Hot Milk is here.

Thanks to Lina Meruane and Kirsty Doole for the interview and to Atlantic Books for the review copy.