The judges have made their decision! The absence of Kate Atkinson’s A God in Ruins is a complete shock. Many of us on the shadow panel thought it was by far one of the best books on the list. The shadow panel shortlist shares three titles with the official shortlist. I’m also pleased to see The Portable Veblen and A Little Life on the list, both of which I rated highly.

Here’s the six shortlisted books. If you click on the cover, it will take you to my review. 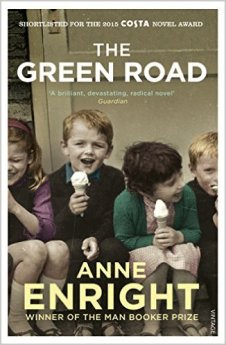 After four weeks of reading and discussion, our shadow panel have decided upon the following shortlist. Like the official judges, we will be re-reading our choices and deciding upon a winner at the beginning of June. The official shortlist is announced this evening; we’re looking forward to seeing how it compares.

If you click the covers of the novels, they will take you to my reviews. 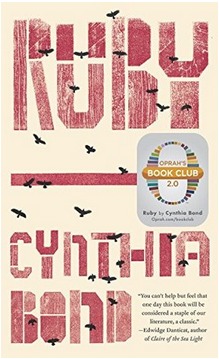 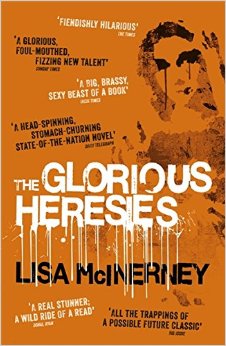 The Green Road tells the story of The Madigans. Their family house in County Clare ‘had a little river in the garden and its own name on the gate: ARDEEVIN’. The family consists of Hanna, Dan, Constance, Emmet and their mother, Rosaleen.

The first half of the novel moves from 1980 to 2005, taking a lengthy chapter for each character’s story. Hanna, in 1980, visits her uncle’s pharmacy to procure some Solpadine and some amoxicillin for her mother.

Hanna’s mother had taken to the bed. She had been there for two weeks, nearly. She had not dressed herself or done her hair since the Sunday before Easter, when Dan told them all that he was going to be a priest.

Dan returns to Galway to continue with his degree but at Easter returns and during Sunday dinner asks his family for forgiveness.

Their mother lifted her hands and shook them free of their sleeves. She wiped her wet temples with the heels of her hands and used her delicate, crooked fingers to fix the back of her hair, which she always wore in a chignon. Then she sat up again and looked, very carefully, at nothing. She picked up a fork and stuck it into a piece of bacon and she brought it to her mouth, but the touch of meat to her tongue undid her; the fork swung back down towards her plate and the bacon fell. Her lips made that wailing shape – touching in the middle and open at the sides – what Dan called her ‘wide mouth frog’ look, then she took a sharp inhale and went: ‘Aggh-aahh. Aggh-aahh.’

Hanna’s chapter introduces the reader to the whole family, including her father and his parents. There’s a particularly brilliant scene where Granny Madigan selects a cockerel and Hanna’s father slaughters it.

The story then jumps to New York in 1991 where Dan, who came for a year abroad and never left, is struggling with his sexuality as the men around him contract HIV.

Constance in 1997 is in County Limerick having a mammogram.

Then there’s Emmet in Ségou, Mali working as a doctor and having a romance with Alice, who’s working on child mortality. And finally, the matriarch, Rosaleen, back at Ardeevan, 2005, writing Christmas cards and thinking about her adult children.

In the second half of the novel, the children all return to Ardeevin – we’re brought up-to-date with their lives and then we see them together with Rosaleen, who has news for them all.

The Green Road is the first novel by Anne Enright I’ve read and it won’t be my last. The clarity of her language, particularly the way she conveys character in few words, and the way in which every single sentence earns its place in the story are impressive. Enright captures a variety of human behaviour and is particularly adept at the relationships between siblings and with their mother.

However, I found the structure of the novel off-putting. Each of the character’s stories is well-written but I felt as though once I’d got into the rhythm of one, it was over and I was jolted to another character, another time, another setting. I assume that Enright structured the novel in this way to convey the passage of time and show each family member as a distinct person prior to bringing them all back together. I think it’s a brave and adventurous way of putting the story together and it will work for some readers and not for others.

On balance, The Green Road is a very good book. I look forward to reading more of Enright’s work.

Thanks to Vintage Books for the review copy.

8th March 2016: The Baileys Women’s Prize for Fiction announces its 2016 longlist, comprised of 20 books that celebrate the best of fiction written by women

Here they are, the 20 books longlisted for this year’s Bailey’s Women’s Prize for Fiction. In alphabetical order (of author’s surname):

A God In Ruins – Kate Atkinson

The Long Way to a Small, Angry Planet – Becky Chambers

Whispers Through a Megaphone – Rachel Elliott

The Book of Memory – Petina Gappah

The House at the Edge of the World – Julia Rochester

The Improbability of Love – Hannah Rothschild

My initial reaction is that the three books I thought were certs are all on there – A God in Ruins, My Name Is Lucy Barton and A Little Life. Very pleased to see all three.

I predicted six of the titles, which is my highest success rate ever! Very pleased to see Girl at War on the list as well as The Portable Veblen. I’ve enjoyed all those I’ve already read, which includes The Green Road which I haven’t posted my review for yet.

As for the rest of the list, I’m delighted to see Pleasantville – I loved Black Water Rising and have had the latest on my TBR pile for ages. I’ve also heard good things from people I trust about The Book of Memory, At Hawthorn Time and The Glorious Heresies.

As always with The Bailey’s Prize there are some books I hadn’t heard of before I saw the list. My absolute favourite part of this is reading those titles, there’s always one in there that surprises me with its brilliance. On looking through the blurbs, I can’t believe I hadn’t come across Ruby, it’s had so many fantastic reviews, and The Anatomist’s Dream is perfect for my PhD thesis so I’m very pleased it’s come to my attention.

I’m looking forward to getting stuck into the reading and debating the books with the rest of the shadow panel. I’m hoping you’ll join in the discussion on our blogs and Twitter too. Can’t wait to hear what everyone thinks of the chosen titles.

It’s almost time! The Bailey’s Women’s Prize for Fiction longlist will be announced next Tuesday, 8th March. Once again, I’ll be shadowing the prize and for the second year running, I’ll be doing so with a panel. I’ll introduce you to the members of that panel on Friday.

For now though, here are the books I’d like to see appear on Tuesday’s list. They’re a combination of books I’ve loved and those I’m keen to read based on what I’ve heard about them so far. I’ve had to cull this list significantly to keep it to 20 books so, as usual, anything’s possible with the real one!

To be eligible, books have to be written in English and first published in the UK between 1st April 2015 and 31st March 2016. Publishers can enter three full length novels per imprint plus anything eligible by writers who have previously won the prize.

I’ve reviewed the first eleven titles – click on the covers to go to my reviews – and read the next three as well (reviews coming soon).