Earlier this year, I read my first book by the female giant of Japanese literature, Yoko Ogawa. The book was The Diving Pool, a collection of three dark novellas. Ogawa was then shortlisted for The Independent Foreign Fiction Prize for her short story collection, Revenge, which Jacqui guest reviewed. 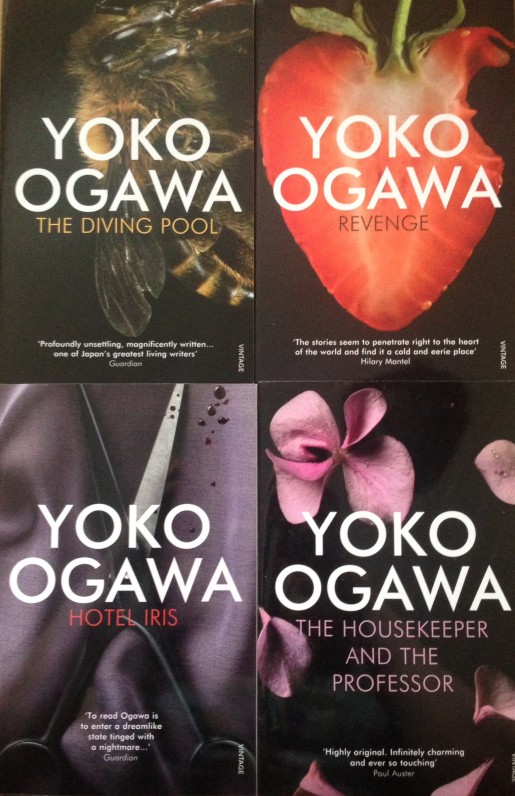 To celebrate the publication of Revenge in paperback on July 3rd, Vintage books are reissuing Ogawa’s other works so far translated into English, with stunning new covers. And I have a full set – Revenge, The Diving Pool, Hotel Iris and The Housekeeper and the Professor – to give away.

Entry is simple: leave a comment below by 12pm U.K. time on Sunday 6th July. The winner will be chosen at random and notified as soon as possible after the closing time. I am accepting world wide entries.

Edit: As always, I’m using a random number generator to choose the prize winner. Entrants have been allocated a number in order of entry as follows:

And the winner is…

Congratulations to Erdeaka, an email is on its way to you. Thanks to everyone else for entering; there was such enthusiasm about Ogawa, I wish I had more copies to give away.

Thanks to Vintage for the prize. 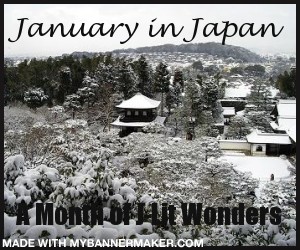 January in Japan is a blog run by Tony of Tony’s Reading List, highlighting Japanese literature. You can visit it by clicking on the photograph above.

In ‘The Diving Pool’, a school girl, Aya, goes to the diving pool, sits high in the stands and watches a boy dive:

Jun is walking out on the ten-meter board. He’s wearing the rust-colored swimsuit I saw yesterday on the drying rack outside the window of his room. When he reaches the end of the board, he turns slowly; then, facing away from the water, he aligns his heels. Every muscle in his body is tensed, as if he were holding his breath. The line of muscle from his ankle to his thigh has the cold elegance of a bronze statue.

Aya’s mother and father are church leaders. They run an orphanage called the Light House; Jun is the oldest child there.

Despite the connotations of safety and protection suggested by the name the Light House, Aya thinks it is ‘the most useless [thing] of all’:

Sometimes I have thought it might be better if I were an orphan, too. If I could have one of the tragic histories so common at the Light House…then I would have been a proper orphan…I wanted only one thing: to be part of a normal, quiet family.

The middle novella, ‘Pregnancy Diary’ is narrated by a woman whose sister is pregnant; it follows the pregnancy from six weeks to full term. Although the story appears to be about a pregnancy, it’s also about food. Right from the beginning, the two are linked:

“Then what was the point of taking your temperature every day for two years?
“I can’t stand the thought of some doctor pawing through them right there in front of me, as if he were trying to find out every detail of how I got pregnant.” She studied the yoghurt clinging to her spoon. It shimmered, viscous and white, as it dripped back into the container.

What a lovely image. And there’s more when the sister begins to suffer from morning sickness:

“The noodles are strange, too,” she added. “The way they squish when I bite into them makes me feel like I’m chewing on intestines, little, slippery tubes full of stomach juices.”

When the morning sickness goes, the sister becomes addicted to the narrator’s grapefruit jam with huge consequences. Although ‘Pregnancy Diary’ is subtler than ‘The Diving Pool’, once again this is a dark story with some very dark behaviour.

The final novella, ‘Dormitory’, concerns a student, the cousin of the narrator, who telephones after an absence of fifteen years to ask for help; he wants to live in the dormitory that the narrator lived in when she was a student.

She rings the Manager, who tells her that they’re still open as he has nowhere else to go but things are ‘difficult’ and ‘complicated’:

“The changes mean nothing in themselves. They’re just an outer manifestation, the skull housing the brain, and what I really mean to say is hidden somewhere in the pineal gland, deep in the cerebellum at the heart of the brain.” He spoke cautiously, as if weighing every word…”I can’t tell you any more than that,” he said. ”But in some curious way the dormitory seems to be disintegrating.”

When the narrator and her cousin arrive at the dormitory, we discover that the manager is missing both arms and a leg. And then there’s the student who disappeared one day, his room left as if he’d popped to the shops. Another dark story, probably the darkest of the three, this time with a hint of magical realism.

The Diving Pool is a good collection. The story ‘The Diving Pool’ is probably the most immediate of the three stories; ‘The Dormitory’, the darkest and most perplexing – don’t expect any neat endings here, while ‘Pregnancy Diary’ is a slow burner. I wasn’t sure about it on first reading but day later it’s still niggling away at me, there’s something very dark in the narrator’s behaviour as a feeder.

All three stories, while seeming quite disparate on the surface, share themes of family, food and loss. Ogawa’s writing is crisp with some startling imagery sprinkled as required. I’ll certainly be reading more of her work.