Today’s list comes in reaction to this list on Publishers Weekly: The 10 Funniest Books, only two of which are written but women and none by writers of colour. Note to us all: only  white men are funny.

Or not. I’m struggling a little with this one as funny isn’t my go-to so please add your suggestions, especially books by women of colour from beyond the UK and USA.

What Looks Like Crazy on an Ordinary Day – Pearl Cleage
HIV, religion, love

Is Everyone Hanging Out with Me? – Mindy Kaling
memoir

Links are to my reviews

Choosing the books that I’ve loved, recommended and bought the most copies of for friends wasn’t difficult, whittling them down was. Because of that, I’ve gone for fifteen books that I enjoyed the most this year. If you click on the title of the book, it will take you to my original review.

Questions of Travel follows Laura and Ravi. Laura chooses to travel, using her inheritance from her aunt to do so; Ravi is forced to travel when the civil war in Sri Lanka visits his doorstep. de Kretser considers the myriad of ways in which we travel in modern society in a novel that’s sublimely written with a perfect ending. Winner of three awards in Australia, I’m astonished it hasn’t had a bigger fanfare in the UK.

Love, Nina contains a series of letters from Nina Stibbe to her sister Vic, written in the 1980s. At the time, Stibbe was a nanny to the sons of Mary Kay Wilmers, editor of the LRB. Alan Bennet frequently pops round for dinner, while the street contains a number of the UK literati. Stibbe’s letters are full of keen observations delivered in the same tone, regardless of the participants, and this makes the book both warm and humorous. It’s one of those books that’s larger than the sum of its parts. A joy.

Apple Tree Yard tells the story of Yvonne Carmichael, a 52-year-old geneticist, who embarks on an affair with a stranger. An affair that will threaten her family, her career and ultimately, her freedom. Told in retrospect beginning with Yvonne standing in the dock at the Old Bailey, Apple Tree Yard had me up late at night, frantically turning pages. It’s a tightly plotted tale with an ending that will leave you gasping.

A Tale for the Time Being – Ruth Ozeki

A Tale for the Time Being is the dual narrative of Ruth, an American novelist living on a Canadian island, and Nao, a Japanese school girl. Ruth finds a Hello Kitty lunchbox, washed up on shore, containing Nao’s diary, some letters and a watch. She assumes it is debris from the 2011 tsunami. As Ruth reads Nao’s diary and the store of her family unfolds, we read Ruth’s story and are manipulated by it. A wonderful story of time and quantum physics.

A Girl Is a Half-Formed Thing – Eimear McBride

After almost a decade of rejections, the small, independent Galley Beggar Press published this gem which went on to win The Goldsmith’s Prize. A Girl Is a Half-Formed Thing is the story of an unnamed female narrator as told to (for?) her brother who is dying of a brain tumour. It is brutal both in its short, staccato prose and in content. (I don’t recommend reading it in the depths of January, it’ll send you over the edge.) This really is ‘a new voice in fiction’.

Winner of this year’s Man Booker Prize, The Luminaries is a yarn of a tale set amongst gold diggers during the gold rush in New Zealand. It is a story of murder, theft and love with a with a structure that builds throughout the first half and explodes with revelations in the second. One to indulge in.

Barrington Jedidiah Walker, 74, born in the Caribbean but resident in London has kept a secret for fifty years from his wife and two grown-up daughters: the love of his life, his best friend Morris. Barry decides it’s time to come-out but obviously, it’s not going to be that easy. Evaristo has a wonderful ear for dialogue and the rhythms of Barry and Carmel’s speech are a joy.

A story told from the point of view of a fly shouldn’t work but it does and it does so brilliantly. The fly is the reincarnation of Jacob Cerf, an ex-peddler from 18th century France. When Jacob the fly becomes aware that he can influence others, he decides to meddle with the life of Masha Edelman, a 21-year-old Torah Jew and Leslie Senzatimore, a man who lives his life in order to help others. Miller uses their stories to consider whether we really have free will or whether our lives are constrained by other forces.

Six friends meet at summer camp in the 1970s and their lives become entwined forever despite the huge differences in their statuses. Wolitzer follows them through adult life looking at the choices they make and how these affect the whole group dynamic. It’s a dense novel but one that is driven forward by a non-linear narrative and a thread that you know is going to explode spectacularly.

The Engagements opens in 1947 with copywriter, Frances Gerety, creating the line ‘A diamond is forever’. The novel then goes on to intertwine her story – one of a woman who definitely doesn’t want an engagement ring – with those of four others: Evelyn Pearsall, whose son Teddy has just left his wife and children; James McKeen, a medical responder whose wife was recently mugged; Delphine Moreau, whose young lover has betrayed her, and a human rights officer whose helping with the preparations for her cousin Jeff’s wedding to his boyfriend, Toby. An unashamedly feminist look at our society’s values.

Life After Life is the story of Ursula Todd, bound to relive her life until the changes are made that prevent her previous death. The concept sounds bizarre, the execution is brilliant. Atkinson takes us through the war, affairs and a meeting with Hitler. The section of the novel during The Blitz is particularly well drawn, so much so, you’ll want to hide behind your hands during some passages. This one will leave you wanting to find someone else who’s read it to discuss in detail.

The Colour of Milk – Nell Leyshon

The only book on the list not published this year, however it is one of this year’s Fiction Uncovered titles. Set in 1830, 14-year-old Mary tells us about life on her father’s farm with her four sisters and her elderly grandfather. Offered work at the vicarage, Mary is forced to go and tend for the vicar’s ill wife. When the vicar’s wife dies, she is kept on and the course of her life takes a turn for the worst. A novel about the control of men over women told with a voice that will have you rooting for this young girl. 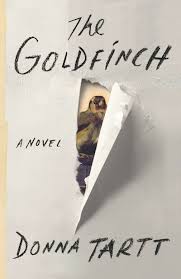 The story of Theodore Decker, who’s caught in a terrorist attack at the Metropolitan Museum in New York City, in which his mother dies. The attack leaves him with the painting ‘The Goldfinch’ in his possession and a ring that he’s to return to James Hobart. These two things will set his life on a dangerous course. Told in immersive detail, this is a wonderful novel which will have you living Theo’s eventful life alongside him.

The Shining Girls is the book that reignited my love of thrillers. It’s the story of Harper Curtis, time-travelling serial killer (stick with it, it works) and Kirby Mazrachi, who should have been one of his victims but who survives his attack and sets out to track him down. But The Shining Girls is more than that, it’s also the story of all Harper’s victims and those victims tell the story of women through the twentieth century. Shining, indeed.

The Twelve Tribes of Hattie was the first book I read to make the list. It’s the story of Hattie, who leaves the segregated south for Philadelphia and a better life. Hattie is already pregnant with twins and with her womanising, gambling, alcoholic husband whom she can’t stay away from, Hattie will have another eight children. These, along with her first grandchild, form the twelve tribes of the title. Each chapter tells one of their stories, stories of homophobia, abuse and mental illness. A beautifully written story of a family and one woman’s quest for survival.

Thanks to all the publishers who’ve sent books for review this year.