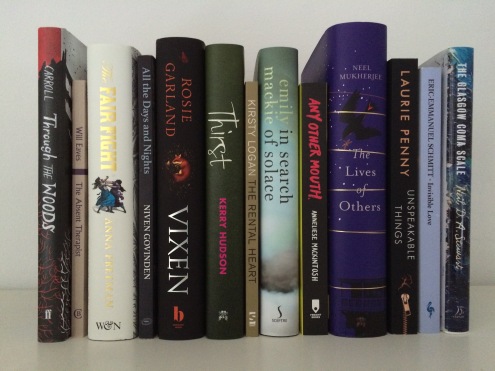 This week, I’m starting with prizes as there seems to be a fair few announcements at the moment. The Man Booker Prize jury will announce its winner on Tuesday. In The Guardian, the shortlisted authors revealed the inspiration behind their books. (Karen Joy Fowler’s contains a spoiler if you you’ve managed to avoid the reveal so far.) The Samuel Johnson Prize shortlist contained four books by women. I’ve only read one so far, but H Is for Hawk is one of the best books I’ve read this year. But the prize that’s got me most excited is The Green Carnation Prize which celebrates LGBT literature. (You can see the longlist in the photograph above.) Eight women on a longlist of thirteen and the two I’ve already read (Thirst by Kerry Hudson and In Search of Solace by Emily Mackie) are two of my books of the year. Expect reviews of more of the books on list before the shortlist is revealed on the 6th of November.

Elsewhere, Lena Dunham continues to be everywhere. She’s guest editor of this week’s Stylist magazine in which she interviews herself while Ashley C. Ford interviews her for Buzzfeed. She’s also written for Pen & Ink about her tattoo. (If you’re interested in Pen & Ink: An Illustrated Collection of Unusual, Deeply Human Stories Behind People’s Tattoos, there’s a great piece on Brainpickings.) In other corners of the internet, people were defending Dunham against the backlash around her book and criticisms of self-indulgence; first, Heather Havrilesky in the Los Angeles Review of Books and second, Sloane Crosley in the New York Times.

Often just as unpopular, Caitlin Moran is in Time talking about Teen Girls, Sex and Pretending to be Courtney Love and in the Radio Times talking about the filming of her co-written sitcom ‘Raised by Wolves’. If her feminism doesn’t interest you, perhaps her piece lamenting the loss of birds in her garden in this weekend’s The Times will. (Paywalled)

Leading feminist writer, Roxane Gay has been prolific again this week. She’s in The Guardian writing about why celebrity feminists should be a gateway to feminism, not its all; on VQR Online talking about The Price of Black Ambition, and in Dissent with a Theses on the the Feminist Novel.

Other notable articles are:

If you’d like some fiction to read (or listen to):

And the four best things I’ve read this week: