And Fire Came Down is the second novel in Emma Viskic’s award winning Caleb Zelic series. The first, Resurrection Bay, introduced deaf fraud investigator Caleb by having his best friend die in his arms in the opening pages. What followed was a tightly plotted, sophisticated thriller with a diverse cast of characters who largely re-appear in book two. 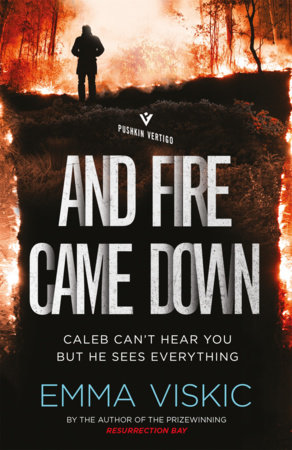 And Fire Came Down begins in similar dramatic circumstances with a woman Caleb doesn’t know finding him in a Melbourne alley and signing for help. He might not know her but she certainly knows something about him. Moments later she’s pursued by a man, runs into the street and is killed by a car. Who she is and how she knew to look for Caleb becomes a case for him to focus on while trying to avoid confronting the other issues in his life – how to keep his business afloat, whether his marriage is over, his relationship with his ex-addict brother.

The investigation swiftly leads back to Caleb’s hometown, Resurrection Bay, where tensions are running high. A group of teens:

‘stole a car and rammed it into a couple of shops […] run by blackfellas. It’s the latest in a string of bullshit – busting windows and throwing rocks. Threw a fucken pig’s head through Aunty Eileen’s bedroom window last week. Not to mention the fire last night.

The local indigenous population are the targets, including Caleb’s mother-in-law – the fire burnt down her medical clinic.

Viskic centres social issues – the rise of the far right, the poverty and prejudice faced by the indigenous population, the drugs trade – in order to explore the damage caused to a community. This is a nuanced portrait which serves to highlight the grey areas of these concerns.

Where the strength of And Fire Came Down really lies though is in its portrayal of family. Caleb’s relationships with his wife, Kat, an indigenous woman, and his brother, Ant, a former drug addict, are both worn thin. They ebb and flow throughout the novel, creating an emotional core which is compelling and affecting.

Like its predecessor, And Fire Came Down is deftly plotted, weaving threads from Resurrection Bay throughout, bringing to a resolution the crimes committed in this book and leaving a couple of big teasers dangling to keep the reader desperate for part three. I’m heavily invested at this stage and can’t wait to see what happens next.

I spoke to Emma Viskic about creating a deaf protagonist, writing about the indigenous population and just how she managed that plotting.

My review of See What I Have Done by Sarah Schmidt

Thanks to Emma Vickic and Pushkin Press  for the interview and the review copies.