On Sunday morning, our Baileys Prize Shadow Panel met in central London to decide our winner. As Antonia tweeted on Sunday morning, meeting regardless of Saturday night’s attack to discuss books was our rebellion. And a cracking discussion it was too.

Before I reveal our winner, I want to give an honourable mention to a book which didn’t make our shortlist. When you shadow a prize such as the Baileys, which has a particularly long longlist, you read and judge the books in a short period of time. The process doesn’t allow for books to settle and, as you’ll know, some books lose their impact over time, others grow. We felt we’d done one particularly book a disservice by leaving it off the shortlist as, during the intervening weeks, it has grown in stature for us due to it’s ambition. That book is Barkskins by Annie Proulx. We recommend it heartily to you now and hope it will find a larger readership.

Our winner then… a completely unanimous decision for it’s style, beautiful writing, engrossing storyline, political history and the way it deals with such complex issues in a thoughtful way without sacrificing story… 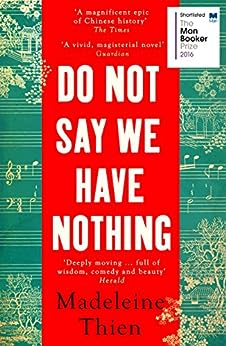 A huge thank you to Antonia, Eric, Meera and Eleanor, it’s been a pleasure to read and discuss the books with them.

The winner of the Baileys Women’s Prize for Fiction 2017 is announced on the evening of Wednesday 7th June.

Here we are then, the official Baileys Women’s Prize for Fiction longlist.

When I commented on the longlist, the word of the night was wow and it’s the same again.

Wow: some big names and popular books have gone.

Wow: there are four titles in common with our Shadow Panel shortlist.

Wow: If you’re only reading the shortlist you’ve an absolute set of treats in store (although I implore you to read the longlist, it’s full of brilliant books).

Here’s my reviews of the shortlisted books:

Do Not Say We Have Nothing –  Madeleine Thien

In a single year, my father left us twice. The first time, to end his marriage, and the second, when he took his own life.

Do Not Say We Have Nothing has one of the most arresting openings I’ve read in a while. The narrator who speaks these words has several names – her Chinese name, Jiang Li-ling; her English name, Marie Jiang, and Girl, her father’s nickname for her because the Chinese word for daughter and girl is the same. She lives in Vancouver, working as a university professor in mathematics, but the story that concerns her now is that of her father and, in particular, events during the creation of The People’s Republic of China and the uprising in Tiananmen Square in 1989.

After Marie’s father dies, her mother introduces her to the Book of Records. Passed down through their family, it tells the story of Da-Wei and May Fourth. They only have book 17 of numerous volumes and Marie’s mother tells her it’s a story copied out by a ‘refined calligrapher’.

At the end of the same year, Marie’s mother takes a young woman into their home. Nineteen-year-old, Ai-ming has left Beijing after being part of the events in Tiananmen Square. Marie’s mother has agreed she can live with them for the time being as Ai-ming’s father was Marie’s father’s composition teacher when he was a student at the Shanghai Conservatory of Music.

Although Marie is initially hostile to Ai-ming, she relents as Ai-ming begins to share the contents of the Book of Records and how the book came to be part of their family. The latter is one of many stories her grandmother, Big Mother Knife, told her:

“I assumed.” Ai-ming told me, “that when Big Mother’s stories finished, life would continue and I would go back to being myself. But it wasn’t true. The stories got longer and longer, and I got smaller and smaller. When I told my grandmother this, she laughed her head off. She said, ‘But that’s how the world is, isn’t it? Or did you think you were bigger than the world?’

Do Not Say We Have Nothing is a number of things: it is the story of a family’s history, it is a story of life in China during a turbulent period in its history; it is a story of love, and it is a meditation on art and its role in our lives. All of these parts are interesting and make for a hugely satisfying novel but it is Thien’s examination of art which I found most interesting.

Many of Thien’s characters are storytellers: Big Mother Knife, her brother-in-law – Wen the Dreamer, Ai-ming, and Marie. While Marie’s father, Kai, Ai-ming’s father, Sparrow, and Ai-ming’s aunt, Zhuki, are musicians and composers. Her exploration of their craft asks questions around the value of art in a closed society and what benefit stories serve to future generations. The former is neatly summed up in a paragraph from Sparrow’s perspective:

He wanted to tell his mother about an entirely different recording, Bach’s six sonatas for the same two instruments. Throughout his life, Bach had returned to these six pieces, polishing and revising them, rewriting them as he grew older. They were almost unbearably beautiful, as if the composer wanted to find out how much this most basic of sonata forms – exposition, development, recapitulation – could hold, and in what ways containment could hold a freedom, a life.

The role of storytelling in the way in which the Book of Record is copied but altered slightly or details inserted in the retelling, making it relevant to the new narrators and readers. Thien interweaves this discussion into the narrative without it ever threatening to overwhelm the story itself. It’s a skilful consideration of the work Thien herself is doing too.

Do Not Say We Have Nothing is a complex, satisfying work on family, society, history and art and the impact all four have on the future.

Thanks to Granta for the review copy.

It’s after midnight and I’m on a train, typing this on my phone. The Baileys Women’s Prize for Fiction Longlist 2017 has just been announced and my initial thought is: wow.

Wow that books I loved and hoped would be on the list are there: Midwinter by Fiona Melrose; The Essex Serpent by Sarah Perry; The Power by Naomi Alderman; Stay With Me by Ayòbámi Adébáyo; First Love by Gwendoline Riley; The Lesser Bohemians by Eimear McBride; Little Deaths by Emma Flint.

Wow that I predicted seven of the list – my highest score ever.

Wow that there are 16 books, rather than the promised 12. It shows that the past 12 months have been exceptional for writing by women. However, with just over three weeks until the shortlist announcement, it does make things challenging for the Shadow Panel.

And wow that Homegoing by Yaa Gyasi isn’t on the list. Every year this prize misses an exceptional book and this is a stunning omission, made all the more noticeable when there are only three books by women of colour on a list of sixteen.

The list in full. I’ve linked to my reviews for those I’ve already covered and will add to this as I read the rest:

Do Not Say We Have Nothing – Madeleine Thien

The Woman Next Door – Yewande Omotoso

The Sport of Kings – C.E. Morgan