Juno Dawson had me at:

Yes, yes, YES. Not only do I agree with this, I love that Dawson gives gender a male pronoun and the connotations which come with this. 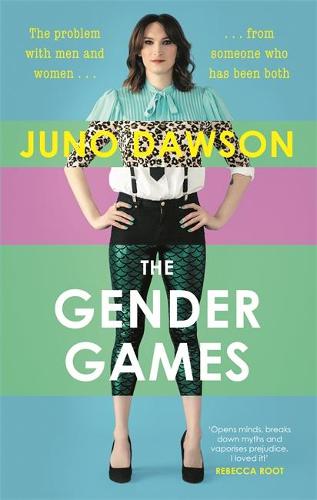 The Gender Games then is part-memoir, part-gender theory, part-cultural critique. Dawson interweaves all three of these aspects to discuss her transition from cis male to trans woman, considering the effect her transition has had (and is still having) on herself and her family.

The book begins with a reimagining of the day Dawson’s mother went into labour.

‘Congratulations, Mr and Mrs Dawson. You have a healthy baby boy.’
And that was where it all went wrong.

Also no. Any creative writing teacher worth their salt will tell you that a great story never starts at the beginning, it starts when something changes. On 6 August 2015, I told my mother that I was a woman.

Dawson alternates between snapshots of her life – from growing up in Bingley, West Yorkshire, to being ‘a right pair of little cunts’ with a friend at school, to coming out as a gay man, to being a primary school teacher, to deciding to transition and the process of that so far – and discussions around gender theory. As someone who’s studying the latter as part of their PhD work, I found Dawson’s relaying of the key ideas of performative gender theory (the idea that gender isn’t fixed) to be clear, succinct and well-researched (there are footnotes) while maintaining the conversational tone in which she has chosen to write. As an introduction to gender theory alone, The Gender Games is worth reading.

There are many other things I loved about this book too: Dawson’s honesty is striking; she’s no holds barred in terms of discussing the shape her life has taken, including her sex life (a section which comes with four pages of warning for her parents encouraging them to skip this bit). She talks about being a teacher and the limits of the education system – just how bloody difficult it is to work in a system that values results over the well-being of students, teachers and parents. And she discusses the impact of culture on the way we view ourselves:

Culture and society are a two-way mirror. Ropey and clichéd, but life does imitate art as much as art imitates life. ‘The media is the message and the messenger,’ said Pat Mitchell, former CEO of PBS, in the fantastic 2011 documentary Miss Representation.

She looks at TV, film and music. She discusses wanting to be a Spice Girl, the impact Madonna has had on our view of women, and the idea of ‘strong female characters’ – a term Dawson seems to dislike as much as I do while acknowledging that these representations are beginning to shift our society’s view of women.

Dawson is very clear that she isn’t representing the trans community, this is her transition and her story. What I do think she does very well which she does – and should – own as representative, is discuss feminism and what it can do for women and men from her position as a modern-day Tiresias:

My credentials to speak on such issues have been challenged, but I think trans voices are uniquely positioned to discuss inequality. For thirty years, I was given access to the ultimate prize: white male privilege. As you’ll learn, I never ‘passed’ as a straight man, so it’s hard to say what power I ever really had at my disposal, but I have lived as both a man and a woman while at the same time never being accepted wholly as either. Like some mad soothsayer in mythology, I’ve lived slightly outside of my gender my whole life – and I’ve seen both sides.

The Gender Games isn’t just a cracking good read, for the times we live in and the fight we still need to win over the destruction gender wreaks on us and our society, it’s an essential one.

The Gender Games is out now and available from Amazon, Waterstones or your local independent bookshop. If, like me, there isn’t an independent near you, I recommend Big Green Bookshop.

Thanks to Two Roads for the review copy.