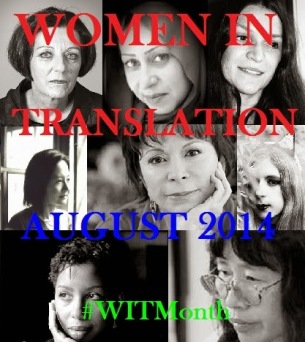 Women in Translation month is hosted by Biblibio. You can find a full list of reviews posted on her blog.

On 13 October 1991 my grandparents killed themselves. It was a Sunday. Not really the ideal day of the week for a suicide.

So begins Adorján’s memoir about her grandparents and her quest to discover more about them. On the day they died, her grandfather is terminally ill:

In the space of a few months his weight had dropped from 70 to 58 kilos, and he looked as if he had shrunk. He sat propped on cushions and did not rise to his feet even when visitors left. He had heart trouble. His heart muscle was weakened, a phenomenon of old age, or perhaps the long-term result of a typhoid infection he had suffered during the wars.

Adorján’s grandfather was a doctor but she knows little about his life prior to his and her grandmother’s flight from Hungary in 1956. The family know he was interned in Mauthausen but little else.

The book progress with two strands being considered and the narrative switches between the two. The first is Adorján’s attempt to piece together her grandparents’ lives. She interviews a number of friends of her grandparents, making some surprising discoveries, particularly about her grandmother.

I try to reconcile what Erzsi [her grandmother’s best friend] says with my own picture of my grandmother. The doctor’s beautiful wife, the successful mother, the elegant hostess, the excellent cook, amusing company at a table, this interesting, clever, temperamental woman, sometimes appearing arrogant – can she really have been profoundly insecure? Can she have felt unloved and lonely?

As the English phrase goes, it does ring a bell.

The deepest feeling known to me is the sense of not belonging. I grew up with that feeling. It is not a pleasant one, and I don’t know where it comes from.

This leads the reader to realise that one of the reasons Adorján writes the memoir is to try to find out where she came from to help her understand where she belongs. The other is to try and understand why her grandmother – a healthy woman in her seventies – chooses to take her life alongside her husband.

An Exclusive Love is an interesting book for the periods in history it covers and the depths of love it shows between this couple. Their final moments are deeply affecting.