Day two of my BBC National Short Story Award coverage and it’s the turn of my all-time favourite writer, Sarah Hall and an extract from her story ‘Sudden Traveller’. 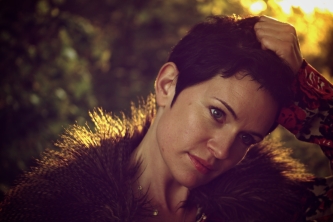 You breastfeed the baby in the car, while your father and brother work in the cemetery. They are clearing the drains of leaves and silt, so your mother can be buried. November storms have brought more rain than the valley has ever seen. The iron gates of the graveyard are half gone, the residents of the lower lying graves are being made moist again. Water trickles under the car’s wheels. The river has become a lake; it has breached the banks, spanned the valley’s sides. And still the uplands weep. On the radio they have been talking about rescue squads, helicopters, emergency centres in sports parks and village halls. The army is bringing sand. They have been comparing measurements from the last one hundred years. The surface of the floodwater is decorated with thousands of rings as the rain comes down.

Inside the car is absolute stillness. When he is finished, the baby sleeps against your side. There are only two small feeds a day now. His mouth has become a perfect tool and you no longer have any marked sensation, no tingling, no pressure across the chest wall as the milk lets down. His mouth remains slightly open, his cheeks flushed. There are bright veins in his eyelids, like light filaments in leaves. He rests heavily against you, hot, breathing softly, like a small machine, an extra organ worn outside the body. You could try to place him carefully on the front seat, under a blanket, get out and help clear the leaves. You would like to feel the cold air against your face and hands as it streams over the mountains. You would like to work with the men. But you dare not move. If the baby senses a temperature change, he will wake, he will want more of you. You could wear him in the sling to work, but the rain keeps coming, slanted, determined to find everything.

You sit in the car, watching reefs of cloud blow across the valley, watching the trees bow and lean and let go of their last leaves, hearing the occasional lost call between your father and brother, and feeling the infant heat against your side. So often it is like this – suspension from the world. Waiting to rejoin. Nobody warned you about this part. The baby is some kind of axis. He is a fixed point in time, though he grows every day, fingers lengthening, face passing through echoes of all your relatives, and the other relatives, heart chambers expanding, blood reproducing. It is like holding a star in your arms. A radiant new thing, whose existence was unimagined before it was discovered, illuminating so many zones, and already passing. All stories begin and end with him. All the moments of your life, all its meanings and dimensions, seem to lead to him and from him.

The winners of the BBC National Short Story Award with Cambridge University will be announced on 2ndOctober on BBC Radio 4’s Front Row. The shortlisted stories are available in an anthology published by Comma Press, out now: https://commapress.co.uk/books/the-bbc-national-short-story-award-2018