The first half of Han Yujoo’s The Impossible Fairytale tells the story of two twelve-year-old children: Mia, the child with two fathers, and The Child.

Mia is spoilt: she has a set of seventy-two German watercolour pencils from one of her fathers; her every need is met. The only potential problem in her life is that one of the fathers isn’t aware that the other exists. 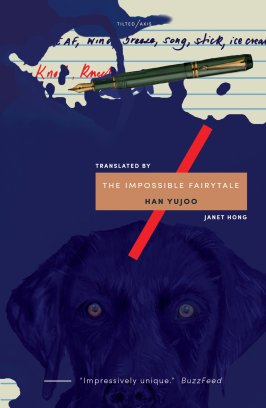 Early in the novel, Mia declares that she’s going to buy a fountain pen when she grows up. She read in a book that you can use it to kill someone.

But, of course, Mia has no desire to kill anyone; in fact, she doesn’t understand the words death or kill. She is a lucky child, and she lacks the passion, let alone the opportunity, to kill someone; she doesn’t yet know that people kill even in the absence of emotions such as hatred. She doesn’t yet know that rather than trying to aim the tip of a fountain pen at someone’s skull from a tall building, it is far more effective to drive the pointed metal tip into someone’s throat, a fact she would have learned if she had read more books. But she is interested only in detective novels, and because there are more things that she doesn’t know than she does know, her world is simple; and for that reason, she is lucky. Anyhow, I’m going to buy a fountain pen when I grow up, she says. I like the way it sounds. Fountain pen.

Like Chekov’s gun, Han has planted the idea of violence in the opening pages of the novel and, at some point, it has to detonate.

The Child is in Mia’s class at school.

She wishes she could be erased. But every time she tries to erase herself, she only grows darker. Every day, she grows darker. Enough for her body to gobble up her shadow. At school, she exists like a shadow. Or she has become a shadow and is absent.

The Child is abused and neglected. She spends most of her time in pain from a range of sources: her fingernails, cut so short the flesh below is exposed; her stomach, from hunger or the anticipation of what’s to come at home. While Mia is in trouble for a story spread about another classmate killing chicks, the Child has stolen the key to the school classroom. She uses it to enter after school and add sentences to the journals which the pupils write. Her own journal masks the reality of her situation:

No trace must be left. She must disappear instantly, as though she has never existed, not even for an instant. She, too, writes in her journal. But she records nothing. Nothing about herself. Every time the journal is returned to her, she learns how to camouflage more and more words with other words. Cheek with leaf, bruise with wind, blister with light breeze, fingernail with butterfly, curse with song, calf muscle with stick, tongue with ice cream, palm with moon, hair with stars, sigh with whistling, grip with tree branch, shoe heel with footprint, glass shard with sky, spine with dog, thigh with cat, stick with streetlight, crying with bird, pain with bright colors. When I opened the window a light breeze blew in. I wanted ice cream, so I went to the store. There was dew on green leaves. I saw the yellow cat’s family. It was strange that their eyes were green.

The Child makes a decision about the journals which leads to trouble for the whole class. While the teacher tries to resolve the situation with threats, the violence the children perpetuate escalates, leading to a fatal incident.

The second half of the book plays with what we’ve encountered in the first. The narrator is revealed to be the Child who is now both the writer writing the novel and a character in the novel.

You look like you’re twelve, and you also look like you’re twenty. According to simple arithmetic, you’re probably twenty-seven years old now, but no one would be able to guess that. Twelve years old and twenty years old, somewhere in between those two ages, time was torn and crumpled, repeatedly, until it finally disappeared.

Han explores what fiction is and, in doing so, questions how we fictionalise our own lives. She considers the overlap of time and whether different versions of ourselves can co-exist – does the person we were at twelve still live? Are they running around in our world, narrowly missing bumping into our older self?

There are no answers to this conundrum, of course, but there’s a hypnotic beauty in the repetition of language and ideas Han uses to interrogate the idea. Credit to Janet Hong for what cannot have been an easy text to translate. Han’s wordplay where she links meaning and concepts in a stream of consciousness exploration can’t always directly translate. It seems that Hong manages to maintain the intention and meaning of the original text, even if specific words have had to be substituted.

Water isn’t beautiful at all. When water freezes, it becomes ice. Ice is more beautiful than water. But neither water nor ice is beautiful. Water flows. Ice is slippery. I’ve run on ice before. No one was on my back. Every time my hooves touched the ice, I heard a strange noise. It was the sound of me slipping, on and onward. So I guess I can’t say that I ran on ice. Can I say that the ice slipped? The ice slipped up. I was afraid that the slipped-up ice would crack, I was afraid that the water colder than ice would drench me, so on and onward I went.

The Impossible Fairytale is an innovative exploration of the bounds of storytelling. The first of Han Yujoo’s work to be translated into English, I sincerely hope it won’t be the last.

I spoke to Han Yujoo about fiction, the collapsing of time and working with a translator.

Thanks to Tilted Axis Press, I have five copies of The Impossible Fairytale to give away. To win, leave a comment either here or underneath my interview with Han Yujoo on YouTube by 6pm UK time on Sunday 24th September. Giveaway is UK only. Winners will be chosen at random and notified soon after the closing time.

The giveaway winners are Ann Bradley, Christabel, Lara Alonso Corona, Victoria Goodbody and Eva. Please check you email for further details. Thanks to everyone who entered.

The Hour of the Star – Clarice Lispector (translated by Benjamin Moser)

Thanks to Tilted Axis for the review copy and the giveaway and to Han Yujoo for the interview.