[…]he had looked at her in the way people did: with a certain wariness, the kind that comes from encountering up close an animal that might prove unpredictable. His eyes had rested on her when he thought she wouldn’t notice, taking the measure of her. She was used to it and often played up to it, acting more erratic than she was. It was both method and disguise, one she had perfected as the eternal outsider, a way to disappear when physical escape was impossible. 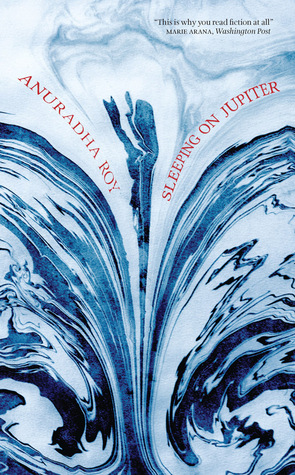 Four women travel to Jarmuli, a fictional town on the coast of India. Three are elderly friends – Gouri, Latika and Vidya – on their first outing together, the fourth is a young woman from Oslo, there to research a documentary. All four women are in the same compartment. When the train reaches one of its stops, the young woman jumps out and buys bread rolls and tea for a woman begging on the platform. As she goes to give the woman the food, one of two men ‘idling on the platform’ tries to get her attention and then brushes his arm against her breast.

The girl stepped backward and in a single move that appeared to take no more than a second, she thrust the bread at the woman and flung the hot tea in the man’s face. She kicked his shin and his crotch as his hands flew to his face. The man stumbled, fell to the platform.

All of a sudden, as if watching a silent film, the women in the train saw the food-stall outside starting to slide backwards. The lamp-post by the stall moved two feet back, then three. They saw the girl turning around to see her train moving out of the platform, the girl running towards the train, very fast despite her backpack, running as if her life depended on it, the second of the two men running after her.

The older women don’t see what happens next and worry for the young woman whose fate is unknown to them. The incident sets a tone of fear and unpredictability that hovers over the whole of the narrative.

The young woman – Nomi – tells her story to the reader in a first-person narrative. In it we discover that she has come to Jarmuli because she knows that, as a child, she had grown up nearby, in an ashram where going outside was forbidden.

Roy also tells the story through the viewpoints of the three women, there to see the temple; Badal, the temple guide, and Suraj, a local photographer helping Nomi with her documentary. She covers themes of love, friendship and aging, with a particular focus on dementia. The key theme of the novel, however, is child abuse. It’s a difficult topic to cover, in a number of ways. Roy’s narrative is a historical one, told in past tense, but that doesn’t prevent her from shying away from some graphic and disturbing scenes.

Sleeping on Jupiter is a taut, tense novel that considers power – who holds it and who abuses it – in a range of situations. It’s clear why it was longlisted for last year’s Man Booker Prize; hopefully that nomination will help to bring the book the wide readership it deserves.

Thanks to Maclehose Press for the review copy.