For every woman who is unhappy with her stretch marks, there is another woman who wishes she had them.

Buy Buy Baby is the story of two women desperate for a baby. Carol’s son, Ben, died in an accident. Now, several years on, divorced and making conversation with Ben’s dog, Jinky, while her ex-husband moves on, she wonders if it’s time to become ‘Mum’ again.

Julia’s a business journalist with a swanky waterfront flat and a designer wardrobe. She’s mired in debt and looking for a baby daddy since dumping her last boyfriend for not wanting to start a family. She’s jealous of her sister whose daughter, Holly, she enjoys spending time with.

Early in the novel, both women meet a stranger who says he has the answer to their problem. But it’s an answer that’s going to cost them both.

At first glance, Buy Buy Baby appears to be a humorous look at two women’s quest for a child: Carol talks to the dog and answers herself back; Julia signs up for an exclusive dating site, but it soon delves into much darker territory. Just what are Carol and Julia prepared to do to satiate their desire?

MacKinven weaves themes of domestic violence, new relationships, affairs and life after death into an interesting look at the pursuit of motherhood. While I wasn’t wholly satisfied with the novel’s outcome, I was impressed at the way in which MacKinven dealt with issues around domestic violence, she’s clearly done her research. 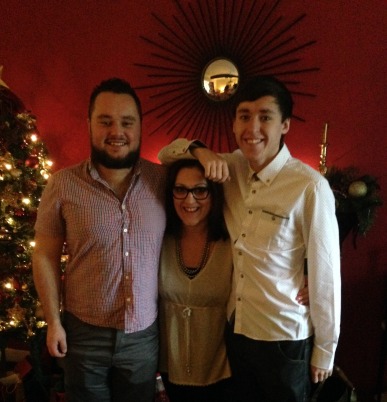 I’m delighted to welcome Helen to the blog to talk about motherhood and women’s identity.

I was recently ‘tagged’ on Facebook with this message.

Motherhood dare! Post a picture that makes you happy/proud to be a mum… (only one picture) I’m going to tag some ladies whom I think are fabulous mothers (I know too many to tag you all – sorry), and can rise up to the challenge of posting a pic of their own. If I’ve tagged you as one of the awesome mums, copy the text and paste it to your wall with a picture, and tag more mums! “I LOVE BEING A MUM! Xx

I do love being a mum, but I didn’t feel the need or pressure to respond to the tag and I sat back and watched as the ‘tagging’ did the rounds of my Facebook friends. The posts that followed made me think about the central theme in my novel, Buy Buy Baby, which is the quest for the two main characters, Carol and Julia, to become a mum. I wondered how childless women felt when they saw these posts. It may be the case that if they’re childless through choice then they don’t care. But I also considered the feelings of women who would like to have children but can’t, or those whose child has died.

It also struck me that I’ve never seen any of my male Facebook friends post something along the lines of ‘I LOVE BEING A DAD!’ It seems to me as if some women only share photos of their children. It’s as if they have nothing to post about themselves and their defining role is that of being a mum, and that’s all they have to say. What happened to their sense of identity after they gave birth? In my view, some women can appear one-dimensional when all they post are status updates on the lives of their children.

If these posts were boasts about buying a flashy car, getting a pay rise or booking a luxury cruise it might sound tacky to brag. But when it’s a picture of their teenager in a ridiculously expensive dress and posing beside a limo on their way to the school prom, it’s perfectly acceptable.

I have no issue with any woman that wants to wear the ‘I LOVE BEING A MUM!’ badge with pride, that’s their choice. But for the sake of balance, I’d also enjoy seeing photos of them as individuals with their talents, skills and interests showcased and not just their child’s latest sporting or academic success. Do these women feel that being a mum is their greatest and only real achievement worth celebrating? In Buy Buy Baby, Julia’s friend Kirsty berates her desperation to have a baby and asks, ‘Is Project Baby the latest must-have accessory you need to complete an outfit?’

We’re bombarded with images of motherhood in the media so it’s easy to see why some women, like Julia, can become fixated by the need to be a mum. It was that obsession that I wanted to explore in Buy Buy Baby. How far would a woman go to achieve her goal? And why do some women feel the need to be a mum over every other aspiration?

In Buy Buy Baby, the two women couldn’t be any more different and yet they share the same burning desire to fill a baby-shaped hole in their lives. This results in both characters being confronted with moral dilemmas and having to make decisions as to whether they’re willing to pay the price not just financially, but emotionally and psychologically too.

On a personal level, I was very lucky to become pregnant easily when I decided to have a family and I had no major problems with the births of my two sons. But knowing how much they changed my life, for the better, I was left wondering how I would feel if I had experienced infertility or my child had died. Would I also be as driven as Julia and Carol to fulfil my need to be a mum? Or would just being Helen be enough?

In my last novel, Talk of the Toun, although the characters were fictional, the setting and time period related to my own upbringing in the 80s within a working-class environment in central Scotland. I had to a certain degree followed the advice to, “write what you know” but in Buy Buy Baby I’ve dabbled with a subject matter that I’ve only observed and researched. I hope the quest for motherhood is a theme that appeals to readers too as I find it very interesting to reflect on women and their role in society, and the way they choose to portray themselves on social media.

Huge thanks to Helen for the insight into the ideas surrounding her novel and to Cranachan for the review copy. If you want to discover more about the novel, then the following blogs will be hosting Helen and the book over the next ten days: