Doctor Morayo Da Silva has led quite a life. Married at twenty-two to thirty-seven year old ambassador, Caesar, she’s seen the world. Discovering Caesar had another wife and finding it difficult to conjure up any enthusiasm for menu planning and protocol, Moraya undertook a Masters degree and became an academic. Eventually she left Caesar. By the time we meet her, she’s been living in an apartment in San Francisco for twenty years with a ‘magnifique’ view and hundreds of books, having ‘outfoxed the [Nigerian] life expectancy by nearly two decades’. 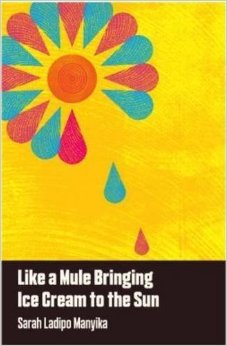 Morayo tells us that her having lived in the same building in a rent controlled city for so long, must be annoying for the landlady but

…the landlady must know what she loses in rent, she gains by having someone reliable like me keeping a watchful eye on the property.

However, Morayo’s reliability is soon brought into question, firstly by her attitude towards bills:

They don’t give you much time to pay these days, but I don’t let this trouble me. Once upon a time I was diligent, extraordinarily diligent, but life’s too short to fuss over such small things. That at least is what I tell myself until the diligence, never truly lost, reappears, and I return to the post.

Secondly, what Morayo discovers in that post is a letter from the Department of Motor Vehicles, the deadline for a response to which was the previous week. When she contacts them, it’s to be told she’s been reported for careless or reckless driving.

Thirdly, as Morayo’s tale unfolds, Manyika moves the narration between a number of characters: Dawud who owns a shop on Morayo’s street; Sunshine, Morayo’s former neighbour; a homeless woman Morayo passes on the street; Reggie Bailey; Caesar, and a chef. This patchwork of narrators shouldn’t work but it does. It works partly because Manyika interweaves her themes about belonging, immigration, race, privilege, age and being a woman throughout and also because she uses it as a device to highlight the disparity between Morayo’s view of herself and other people’s view of her. For example, at the beginning of the novel, Morayo reveals that she’s been thinking about returning to Lagos. The comment is provoked by the smell in the folds of the cloth she considers wearing that day.

I sigh, putting the original fabric aside and opting for another – this one gold and green, wafting eco-friendly, lavender-scented detergent. I wrap the material around my waist keeping my legs spread hip distance so as not to pull too tightly, then I wrap it again and finish with a secure tuck at the side. I choose a contrasting yellow material to wind around my hair and then check in the bathroom mirror, patting down the top of my afro.

This is contrasted with Dawud’s view of her in the following chapter:

He chuckles, thinking that once upon a time she must have been stunning – such a tall woman with a fine ass, even now. She was probably even stylish, although now, at her age, all these bright colours with the pencil and flowers sticking out of her hair only made her look odd.

As Morayo prepares for her seventy-fifth birthday, she tries on the new red suede wedge heeled shoes she’s bought – new shoes being her first birthday tradition – whilst contemplating the tattoo she’s getting to fulfil her second birthday tradition – ‘to do something new and daring with each passing year’ – and balances on the edge of the bath to get a better view in the mirror. She twists, slips, and breaks her hip. The rest of the novel merges Morayo’s recovery, people’s treatment of her and further revelations about her life.

Sarah Ladipo Manyika packs an incredible amount into the 128 pages of Like a Mule Bringing Ice Cream to the Sun. She covers a number of big themes without the book ever feeling less than a cracking story; she blends a number of narrative voices in a way which works brilliantly even though in theory it really shouldn’t; she makes every single word in the book earn its place. Dr Morayo Da Silva is a wonderful character: a woman in her 70s who’s lived a varied life, unafraid to dress as she pleases, contemplate tattoos, read voraciously and discuss sexuality and how she’s found life as a woman and as a person of colour.

If I still haven’t convinced you that you really should read this book, I’ll leave you with my favourite quotation, one which I’m sure all book lovers will sympathise with. While Morayo’s recuperating from the hip operation, Sunshine has her flat cleaned and a number of Morayo’s books are thrown out.

‘You’ve just got so many books. You’ve even got more than one copy of some of them.’

‘Well of course I do! Just like you have dozens of pairs of yoga pants and lipsticks and shoes, don’t you? How would you feel if someone went through all your “stuff” and got rid of what they thought were just duplicates or extras? Just because you would never buy more than one fucking book doesn’t mean others wouldn’t. Doesn’t mean there isn’t a very good reason why I do!’

Thanks to Cassava Republic for the review copy