One of my ‘Ones to Read in 2016‘ was Sarayu Srivatsa’s Man Asian Literary Prize longlisted  If You Look For Me, I Am Not Here. Engrossing and innovative in terms of language use and its take on gender, I absolutely loved it. I’m delighted to welcome Sarayu to the blog to talk about the book.

Where did the idea for If You Look For Me, I Am Not Here come from?

I have lived in Mumbai (Bombay) for 30 years and I belong to the architectural and building fraternity. The first draft of the novel was about architecture and building; its characters were shaped from a combination of people I knew. It was set in Bombay. But then I thought if I were to write about someone, somewhere and about something I didn’t know, the work would be more imaginative.

I chose one character from the first draft, an entirely imagined one – Siva, a 60-year-old male lawyer, who likes to dress up in women’s clothes just before an important case. I needed to know why he did this so I started the story at the very beginning – before he was born. I hadn’t come across any person like Siva; he was entirely shaped in my mind.

I chose Machilipatnam – a small town on the east coast of India as the setting for the story. I have never been to Machilipatnam. I don’t know anyone who lives there or has been there. I created the town based on basic research about its history, geography, climate etc.. I drew a map of the town actually – the quarter where the protagonist lives, and followed it consistently through the book.

When the MS was almost ready I presented the story at a workshop conducted by the London Script Factory organised by the British Council in Mumbai. I had misgivings about the story and wondered if I should abandon it. I met a young scriptwriter who told me the story had touched him. His mother had brought him up as a girl since she had had 3 boys and she longed for a daughter. His father was forced to send him to boarding school to distance him for his mother. His life story encouraged me to stick to my imagined one.

As I was working with an unfamiliar subject and character I needed to do serious exploration. I talked to doctors and psychologists. At one point in the writing of the novel I couldn’t relate to Siva’s thoughts and feelings. His was a difficult life. I came across an advert on hypnosis. I met the hypnotherapist on a whim, and asked her if she would hypnotise me as Siva. He was in my head after all. The therapist, rather surprised, as she had never before done this, warned me of the consequences – I would have to deal with stuff of my own life I may have blocked in my mind, she said. After the hypnosis session, which helped me focus deep, I must admit, the story was clearer to me, at least from Siva’s point of view.

The novel looks at gender and the idea of one body containing both the masculine and the feminine. What made you decide to explore this issue?

The idea of a body containing both the masculine and feminine is not new to Hindu religion. (I am not religious, I must quickly add). God Shiva in his ardhnareshwari avatar (in translation the word means half-woman) is half man and woman. The Gods Krishna and Vishnu are capable of changing into their female incarnations at will. Hijras or transwomen (male-to female transsexual or transgender individuals) are an integral part of Indian society. I had a long converstion with a hijra once (when I was working on a non-fiction book), and perhaps, subconsciously, this prompted me to explore the gender issue. Besides, I wanted to examine the idea of nurture versus nature in connection to gender at birth and after. Heredity determines physiological differences in males and females. On the other hand, how a child is raised influences its psychologiacl development. Every culture promotes gender-specific behaviors for males and females.  Any deviation from traditional gender stereotypes becames glaringly obvious. I tried to to explore this in the novel.

You play with language throughout the novel. I particularly loved the way you use it to recreate the sound of the weather and the attempts at words young children make. Why did you decide to do so rather than describe these things to the reader?

My father was in government service and was posted to villages when I was a child. I didn’t get to go to a school. My mother taught me English (her kind) and maths at home. I didn’t have any access to children’s books. I depended on my instincts and imagination. The sounds of nature became my language. Besides, I learnt Indian classical dance from a very young age. Rhythm and sound are the skin of my thoughts, and often I find myself using words because of the quality of their sound, rather than just their meaning. In my mind I have a feeling for words that soar, plunge or are inert and flat. The selection of words is so instinctive that I am unaware of the choices I make. Indian English, the way it’s spoken, differs from state to state in this country – this adds a curious and amusing local flavour to the language. Language is inventive in India – and children invent their very own language. 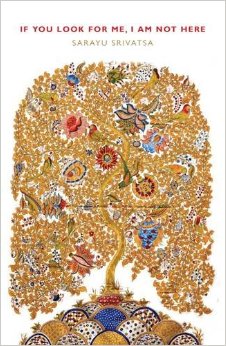 Why did you decide to incorporate a different type of text in the form of George Gibbs’ ledger?

Machilipatnam is known for its vegetable dyes and the craft of dying cloth. It is also a port where the English East India Company set up their trading post to export dyes and cloth to England. I felt compelled to use both these facts in the novel. The idea of George Gibbs, an East India Company factor, who traded in dyes, was born as a result. George Gibbs story although a parallel but a shorter one to Siva’s establishes the historical reference for the town. But it was difficult to incorporate it within the main idea i.e. Siva’s story. At first I started the book with Gibbs’ story leading on to Siva’s but this didn’t seem to work. I tried alternate chapters but George’s part was very short, and therefore inconstant. Consequently, I fattened up his story a bit, got hold of a very ancient ledger and coaxed it into it. I made the ledger appear at fitting times intercepting Siva’s story. I used a different type of text so that it could at once be recognised as Gibbs’ story, separate from Siva’s.

When it was published in India (as The Last Pretence) the novel was longlisted for the Man Asian Literary Prize; how did it feel to be placed on such a prestigious list?

I remember I was travelling when my agent called me with the news. All I could do in response was giggle. For one thing, I am not a trained writer, for another, I use the English language differently and in my own way; I feel discomfited about this, and feel a bit anxious amongst people who use the language confidently. I found it rather amusing that my work should get selected for an international prize. It was only much later and particularly when the media chose to write about it that it dawned on me – that my MS had made it to a prestigious list. The unexpected is so much more flavoursome.

Can you tell us anything about what you’re working on at the moment?

I have been working on another novel. It is a sequel of sorts – a number of lives in the novel – If you look for me – have to be sorted out. I had finished the MS more than a year ago but I had left it to marinate in my mind. Now that the novel – If you look for me – is out and it has had some response to it, I intend to continue work on the second MS.

Murasaki Shikibu – The tale of Genji

Doris Lessing – Ben, in the world

Iris Murdoch – The sea, the sea

A S Byatt – The Matisse stories

Amelie Nothomb – The character of Rain

Maya Angelou – I know why the caged bird sings

A huge thanks to Sarayu Srivatsa for the interview and to Bluemoose Books. If You Look For Me, I Am Not Here is available now.

16 thoughts on “Sarayu Srivatsa on If You Look For Me, I Am Not Here”