‘There are decent people,’ said Mrs Roper, ‘and then there are the weird ones, the ones who don’t belong. The ones who cause the rest of us problems.’

‘Goats and sheep,’ said Tilly from across the room.

Mrs Roper frowned. ‘Well, I suppose so, if that’s the way you want to look at it.’

‘It’s the way God looks at it,’ said Tilly, and folded her arms beneath her poncho.

‘The point is, these people don’t think like the rest of us. They’re misfits, oddballs. They’re the ones the police should be talking to, not people like us. Normal people.’ 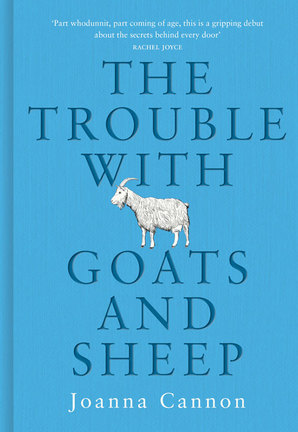 June, 1976. The Avenue. Mrs Creasy has disappeared. No one knows where to or why. They suspect Mr Creasy. Ten-year-old best friends Grace and Tilly decide to investigate. After questioning the local vicar as to how to stop people disappearing and receiving the answer, ‘If God exists in a community, no one will be lost’, they decide the key to finding Margaret Creasy is to find God. They set about this task by visiting the people who live on their estate.

Early in their investigation, Grace and Tilly overhear a conversation between Mr Creasy, Mr Forbes and Eric Lamb in which it’s clear Mr Creasy suspects the others of revealing a secret to his wife and this is why he believes she’s left. This is the beginning of Cannon opening up the secrets which are hidden behind every door on the Avenue. It quickly becomes clear that everyone has a secret and everyone’s told their secret to Mrs Creasy and they’re terrified it’ll be revealed in her absence.

Grace narrates about half of the novel (it’s not quite alternate chapters), Cannon using the limited viewpoint and understanding of a ten-year-old to good effect, introducing questions for the reader. It also allows for Grace’s behaviour towards Tilly to be shown and to echo the main theme of people being different. Tilly is vulnerable to illness. When Grace asks her why she’s wearing a jumper in a heat wave, she replies:

‘My mother says I can’t afford to catch anything.’

‘When is she going to stop worrying?’ It made me angry, and I didn’t know why, which made me even angrier, and my sandals became very loud.’

‘I doubt she ever will,’ said Tilly.

This is the first of a number of occasions where Grace fails to see that Tilly’s differences don’t make her less of a person.

What’s particularly impressive about the novel, however, is the chapters narrated from the third person subjective point of view. These chapters travel around The Avenue, often following in Grace and Tilly’s footsteps, and provide an insight into the thoughts, behaviour and preoccupations of those who live on the street. Cannon excels at revealing how frightened people are of exposing their own vulnerabilities and tacitly agreeing to make one person a scapegoat to avoid anyone noticing they might be different too.

‘Bloody pervert,’ she said. ‘I don’t care what the police said. It’s a normal avenue, full of normal people. He doesn’t belong there.’

The Trouble with Goats and Sheep is an entertaining whodunnit, a glimpse behind the curtains of a ‘normal’ street and a psychological insight into people’s behaviour. It’s a thoroughly enjoyable and very smart novel.

If you want a taste of Joanna Cannon’s writing, I hosted a section of her short story, ‘The Greatest of These’. The post includes links to all the other sections of the story which you’ll find on various websites. Also The Trouble with Goats and Sheep is this week’s Bedtime Book on The Pool.

Thanks to Borough Press for the review copy.

11 thoughts on “The Trouble with Goats and Sheep – Joanna Cannon”