‘Maria is getting married, Sofia. Now it is your turn, nah?’

I tried! I did! But what normal human being would ask another human being to live with a cohort of mother, father, brother and sister-in-law with two children, complete with a sister and brother-in-law and three children next door, and a hole-in-the-wall joining the two houses? (Just writing that sentence about so many people confused me; imagine living with them.) I had to pretend it was the chilli sauce that made my eyes water.

Sofia’s got problems: she’s split up with her boyfriend due to the hole-in-the-wall situation; her mother thinks she shouldn’t wear a hijab; a man on the tube calls her a terrorist; she doesn’t believe in sex before marriage, and her boss at the publishing house where she’s a publicity assistant wants her to write a funny Muslim dating book.

She signs up to an online dating site for research through which she meets Naim, a New Yorker living in London. While their on/off relationship forms a significant part of the first half of the novel, Sofia’s sister and friends also provide ample fodder for the book. Sofia’s sister, Maria, is getting married; Hannah’s becoming a second wife; Fozia’s boyfriend Kam is ‘a tosser’, and Suj, who isn’t Muslim but does have brown skin, is seeing Charles:

He’s black, that’s what he is.’ She threw the apple core in the bin. ‘Can you imagine what my family would say: her mum died and then she fucked off with a black guy.’

And then there’s Conall, the Khan’s Irish next-door neighbour who lets Sofia use his house in his absence to get on with writing the book. 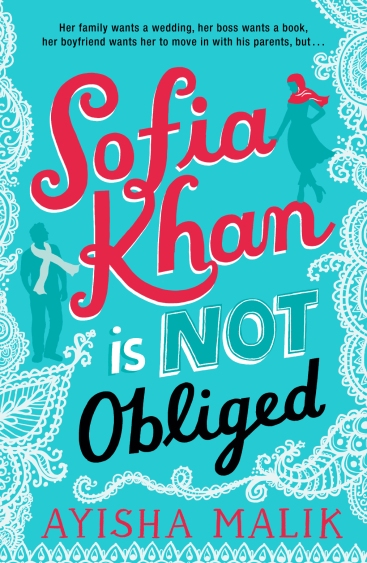 The novel takes place across a year in Sofia’s life. It’s structured like a diary, divided into months, days and precise times, although not every one of the 365 days has an entry. The chronological structure works well although I did wonder whether it was slightly too long – Naim’s part in the story dragged a little, slowing the pace in the middle of the book.

On the whole, I really enjoyed Sofia Khan Is Not Obliged: it’s funny, it’s sweary, it’s well plotted and while Malik shows us what’s unique about life as a hijab-wearing Muslim, she also shows us how much of Sofia’s life is no different to any other young woman’s life in a western city.

Considering the debate around diversity in novels, there’s a really interesting passage towards the end of the book where her editor calls her in to talk about the manuscript:

‘Anyway, we do feel that, though entertaining, there needs to be more sex.’ I folded my arms. ‘Just so that it’s appealing to a wider readership.’

Wider readership? What? Like bored housewives and people who need something to read before the next Mills & Boon comes out?

‘Can I be candid, Sofia?’ Smile. ‘It’s an admirable way of life, really. No drinking, no sex before marriage, up at the break of dawn to pray. It’s really very committed…’ Sounded more like she thought I should be committed. ‘But it’s also a little tricky for people to relate to. And what readers want is something they can understand.’ She twisted in her chair. ‘Of course they want something new and unknown, but really it should also be relatable, you see?’

‘We’re not talking about an exposé or anything. Just maybe one chapter involving something sex-like.’

I stood up to leave as Brammers began typing an email. Just as I was about to walk out of the door, she said, ‘People always get side-tracked by sex. It’ll save you from explaining why you decide to live the way you live.’

I didn’t know I had to explain my life to people as well as get through the process of actually living it.

Quite. Considering the findings of the Spread the Word Writing the Future report, it wouldn’t surprise me if this were an actual conversation someone had with Malik. The idea that a novel about young women dating, negotiating the wishes and desires of their parents and living and working in a city isn’t relatable is laughable as is the idea that white readers – because that’s the subtext here, as if only white people read novels – will be put off reading the book because of the protagonist’s choices. Somehow Patrick Bateman’s choices didn’t put thousands of us off reading American Psycho and I really hope that doesn’t mean swathes of the population relate to the way he chooses to live his life.

Sofia Khan Is Not Obliged is a good bit of commercial fiction. It’s funny, it’s heart-breaking, it’s heart-warming and it has a protagonist who’s determined to live life and write her book her way. An enjoyable read.

Sofia Khan Is Not Obliged is published by new imprint twenty7. It’s available in ebook now and in paperback in January.

Thanks to twenty7 for the review copy.

15 thoughts on “Sofia Khan Is Not Obliged – Ayisha Malik”