When the light shine clear, the broken glass make paths of sparkling moon. Then the bricky walls gleam warm, and all my courage wake. I think: Roos got this cure, we rob it. For my Driver, I face guns and hells, this be my treasure chance.

The north coast of the Nighted States (we know it as the United States of America), sometime in the future. Our narrator is fifteen-year old Ice Cream Star. She introduces herself to us by telling us about her family – her eighteen-year old brother, Driver and her younger brother, Mo-Jacques, who died when he was five and she was six; ‘Still my heart is rain for him’ – and the people she belongs to, the Sengles.

Our people be a tarry sort, and we skinny and long. My brother Driver climb a tree with only hands, because our bones so light, our muscles fortey strong. We flee like dragonfly over water, we fight like ten guns, and we be bell to see. Other children go deranged and unpredictable for our love.

They live in the Massa woods, or at least they do until they’re eighteen or nineteen when they die of a disease they call posies. Some of them think that posies is the same as WAKS, the sickness that killed the white skinned people in America, eighty years previously. Those who weren’t killed were evacuated to Europe, although there’s some anxiety over whether Europe actually exists:

Truth, this Europe mostly be a tale for pacifying littles. Most older children think the sleepers all be dead, but ain’t no proof. If sleepers gone to Europe or to hell, they leave the same bad silence.

On the day the novel begins, Ice Cream, Driver – the Sengle sergeant – and some of the others have been out looking in the evac houses for food, medicine, cigarettes and clothes. In one of the houses are two sleepers, long dead. They set fire to the house to cleanse it but as they watch it burn, someone runs out of the house. The ‘boy’ is white skinned with blonde hair. (I put boy in quotation marks as he soon claims to be thirty-years-old, which, if true, means that his people have a cure for posies.)

Ice Cream Star is the only Sengle to have seen a ‘roo’ (a white person) before. After spending the night in an old library when she was younger, she saw a doe-deer killed by a group of roos first thing in the morning. She believes that roos all have straight hair, are all males, wear the same clothes and ‘run in packs and hunt our people…They slavers, maybe – or they eating children…’.

Driver tries to catch the roo but the roo pulls a gun on him. Ice Cream Star stands between them and takes the gun. And so Pasha Roo joins Ice Cream Star’s world.

Everything I’ve written so far – bar the quotation at the very top of the review – happens in the first eighteen pages of this 629-page novel. And the pace never lets up.

We’re also introduced to the groups who live close to the Sengles. There’s one house of Christings remaining:

Ya, in time before and time remaining, Christings live the same. House got one husband ruling it, with any number of wives and every enfant that they breed. And all believe a god who live in two sticks. Each Christing wear around their neck a string with two sticks crossing – and truth, is healthy people. Can think, this god do something, they live fatter than no Sengle child.

There are the Lowells who live in Lowell mill in Lowell City. They have electricity, generated by the mill’s turbine wheels; ‘water toilets’; their own individual rooms with beds and blankets, and they make paint, furniture and tiles. They breed and sell horses. Ice Cream Star’s own horse, Money, was a ‘flirtation gift of El Mayor himself’.

While introducing us to these groups of people, Ice Cream Star learns two things herself: firstly, that NewKing Mamadou from the Army, the fourth group, has visited the Christings to tell them their queen is dead. They usually take their queens from the Christings but they’ve stood up to him this time. Later, Ice Cream Star will discover that Mamadou intends to take her for his wife. Secondly, El Mayor tells her that Driver’s coughing, which Ice Cream Star’s been excusing, is the onset of posies.

Posies take each person in their sort. Popsicle cough his spirit out. Jay-dee’s belly swell and hurt until she claw it to the blood. Mailman strangle in his throat. He strangle once, then find his breath. Strangle again, and beg for help. Then he cannot bear to wait, he shoot himself in desperate fear. Jennifer been sergeant last. She scream but she forgotten words. Ain’t recognize our faces. Scream a week, then she ain’t speak no more. She stare and dribble her mouth.

And all their face and skin eat up by red and blackish posies. Posies scabbing and they open into sores and horrors. Posies grown inside and outside, blackish death put roots into your body and its flowers bloom.

My death must come before his death. I start a murder war, and all my Sengles die in blood. I blind my eyes and never see the posies come. I shoot my heart.

To simplify The Country of Ice Cream Star to its basic plotline would be to say that the rest of the novel concerns itself with Ice Cream Star’s pursuit of the cure for posies in order to save her brother. But Newman hasn’t created a basic novel, she’s created a complex work with a plot that twists and turns and considers race, religion, politics, class, war and love.

By making people with black skin the dominant race and narrating the story from the point of view of a black skinned woman who speaks in dialect, Newman places the reader – white, standard English speaking readers, more specifically – in a position that is meant to make them feel awkward. They barely exist, this world is not their world and it’s difficult for them to negotiate the language and the way in which this world works. There is no glossary in this book, you have to immerse yourself in it. 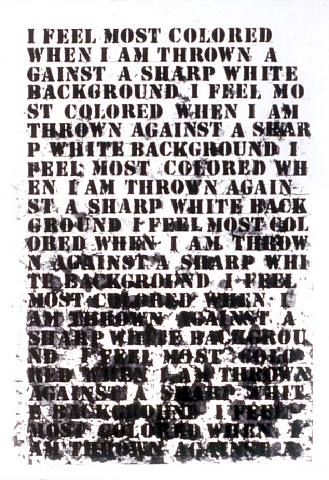 Reading the novel reminded me of Claudia Rankine’s Citizen. In it, she has a photograph of Glenn Ligon’s Untitled (I Feel Most Colored When I Am Thrown Against a Sharp White Background), which she also references in her writing. It’s as though Newman’s taken Ligon’s work and wondered what the world would need to look like for it to become ‘I Feel Most White When I Am Thrown Against a Sharp Black Background’. And it works superbly, partly because it’s disorientating but mostly because the use of the first person narrator means that you see the world as Ice Cream Star sees it and if you’re white, you’re a roo.

As Ice Cream Star pursues her quest, she meets more groups and more roos and her knowledge of the world grows deeper, as does her understanding of people – black and white.

The protagonist is a brilliant creation. She’s the type of hero Buzzfeed would include in an article about ‘women who give no fucks’ (and in this world, at fifteen, she is a woman and she acts like one). She does care though: she cares about the littles who look to her for direction; she cares about her brother and the men who surround her; she cares about people treated badly and placed in danger. She’s determined to lead her people, regardless of the men who try to take her for themselves/install her as a religious icon/protect her from the brutality of war. But she’s also determined to get the cure at whatever cost it comes at. Of course that price is going to be high.

I’ve been avoiding writing this review for ten days because I didn’t know if I could do this book justice – I still don’t think I can. The language and the ideas in it are worthy of a post-graduate essay; I certainly haven’t teased out everything this book has to offer yet, I expect it to take several re-reads to do so. What I do know is that the language is inventive, playful and thoughtful; the themes are complex and explored through the story, without the heavy-handedness that some literary novels employ, and Ice Cream Star is a wonderful, complex, living hero who acts like a person (as do the supporting cast). I’ll end with my favourite lines from the book, which, I hope, helps show all three of these things. They come from a point where Ice Cream Star is being held up as a religious icon but is about to wage war with the support of the church. One of the apostles is reading to her from the Bible:

Here my patience run entire. Known these metaphorical tales. Metaphorical mean, the story be stupidity beyond. So they pretend it mean something else, whatever they like most.

The Country of Ice Cream Star is definitely a great book. It’s also an important book. Only time can confirm my suspicion that this book will become a classic.

Thanks to Chatto & Windus for the review copy.

22 thoughts on “The Country of Ice Cream Star – Sandra Newman”