In three years, she would finish school. She would not have to stay in this town forever.

In the mid-1970s, Else Dybdahl is a teenager in a small Norwegian costal town. It’s the sort of town that could be found in many countries, one where everyone knows everyone’s business and the local pastor rules over the town preaching fire and brimstone:

He cleared his throat. ‘Picture yourself dead,’ he said, ‘while the family who mourns you knows that you are damned to hell. Picture your husband or wife, your children, your parents, each weeping by your coffin for your forsaken soul. Some of you know that the path you have chosen is bound to lead you here at the end of your days. Others will look to your neighbours and deem yourselves absolved. But we are all of us sinners.’

The book is set just prior to the oil boom that made Norway rich. Else’s family are poor – her father is a fisherman too keen on homebrew – but this doesn’t prevent her from sneaking out of the house to meet Lars Reierson, son of the richest man in the town.

Lars lifted his hands to her shoulders and pulled her close. While greasy mists from the mobile kitchen settled over them like clingfilm, Else blinked at his grin. His lips gathered in a pucker before gluing shut her mouth. Hard, soft. Wet, rough. Her stomach seethed; bubbles danced along her throat. Between her ears. She was all fizz. It felt like laughing. 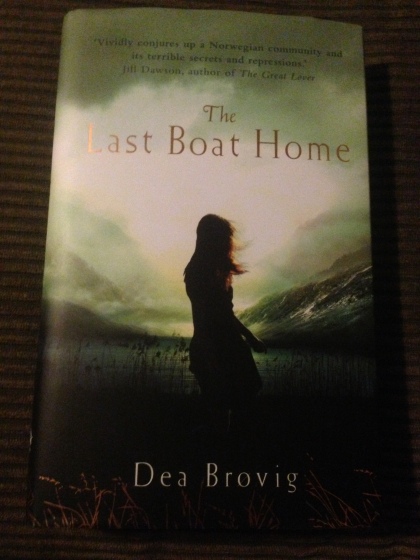 Two significant events happen in the book to change things for Else.  The first is the arrival of Circus Leona, an event which seems to disturb the whole town; some are thrilled and excited, others disbelieving that one of their number could rent their land to such an organisation. However, when the circus arrives, it seems to be one man who makes the biggest (forgive the pun) impression:

Valentin Popov’s gaze swept the crowd and a rising chant from the stalls brought a smile to his lips.

He turned to the animal. Laying his palms on its underbelly, he jacked his thighs. A cry tore from his throat. He closed his eyes and a vein snaked down his forehead. As he lifted the horse towards the ceiling of the Big Top, a network of blood vessels sprang to the surface of his skin.

‘Jesus Christ,’ said Lars under his breath. The strong man’s arms were swollen with mottled lumps of muscles when he opened his eyes and beamed at his supporters. They howled and clapped and stamped their feet while, above him, the horse tossed its mane in the air.

The second event occurs thirty years later and is Lars’ return to the town along with his wife and children. In a narrative strand which runs alongside the events of the 1970s, we see Else’s life now, one in which she runs her own massage therapy business, while taking care of her thirty-year-old daughter, Marianne and her eleven-year-old granddaughter, Liv. The arrival of Lars forces Else to confront the events of the earlier time, attempting to prevent the exposure of long kept secrets.

The Last Boat Home is a novel about relationships, those between mothers and daughters, between lovers, between townspeople, between residents and incomers. In crisp prose which conjures the haunting atmosphere of a insular town on a cold coast, Brøvig explores what it’s like to have to survive – mentally and physically – in a place you wish to escape. It feels inappropriate to say I loved this novel because parts of it are so brutal but it stands up to re-reading and I think that’s due to the sense of place it evokes and the vividness of its key events. I look forward to reading Dea Brøvig’s next work.

Thanks to Hutchinson Books for the review copy.