An icy rush of air, a freezing slipstream on the newly exposed skin. She is, with no warning, outside the inside and the familiar wet, tropical world has suddenly evaporated. Exposed to the elements. A prawn peeled, a nut shelled

11th February 1910, Ursula Todd is born, strangled by the umbilical cord. No doctor is present at the house due to the snow that has fallen and closed the road.

11th February 1910, Ursula Todd is born and lives. The doctor arriving just in time, before snow closed the roads, and cutting the umbilical cord wrapped around Ursula’s neck that would surely have killed her.

Kate Atkinson’s eighth novel Life After Life tells the story of Ursula Todd, a girl, and subsequently a woman, destined to live her life over and over, sometimes in a slightly different way, other times featuring more drastic changes. It is about how one moment can change a lifetime.

‘Why is everything an “adventure” with you?’ Sylvie asked irritably to Izzie.
‘Because life is an adventure, of course.’
‘I would say it was more of an endurance race,’ Sylvie said. ‘Or an obstacle course.’

It is credit to Atkinson’s incredibly vivid writing that you become attached to these people time and again and that the structure, rather than create difficulties or disjointedness in the reader’s understanding, brings us to a deeper knowledge of Ursula and her motives.

I wondered whether the repetitive structure, in particular, Ursula’s many rebirths on the same day, would become tedious. But Atkinson – mindful of her audience – tells the events of the day from a slightly different point in time or indeed, a different point of view each time. In later events that are revisited and played differently, cross points are created so we build up a full picture of what will always be and what might have been if X had happened or Y hadn’t. 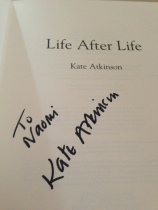 Life After Life is a very difficult book to talk about without spoiling anything (as I’ve seen several reviews and articles do recently, and not just for this book) as there are events that happen and points where the writing is so vivid that I want to talk about them. However, as a reader, I hate a good book being spoilt so I won’t. Instead, I’ll simply point out that my urge to discuss this book points to it being very very good indeed. A cert for the Women’s Fiction Prize shortlist or I’ll eat my (signed) hardback copy.