Butter is a 423lb teenager who bounces ‘between bingeing and purging’ and has ‘a handicapped sticker’ for the school car park, requested by his mum, so he can park right at the edge of the student allocated spaces. But that’s not his only problem. 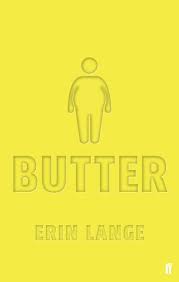 At school, Butter’s largely ignored by his fellow students, including ‘the fake blonde and fake tanned’ Anna who Butter has begun an online relationship with. Well, I say Butter, what I mean is that his alter ego, the private school attending, sport loving JP has begun an online relationship with Anna. The only thing Butter and JP have in common is their saxophone playing and the piece that they’ve composed for Anna.

But things change for Butter when he steps in to try and support Anna after she argues with her best friend in the middle of the school canteen. Firstly, Jeremy one of the ‘cool’ kids gets to her at the same time and tells Butter to ‘waddle on back to the big and tall section’. Secondly, Anna’s reaction to this is to turn red and Butter realises that she pities him. Thirdly, when Anna tells JP about the fight later online, she reduces Butter to a footnote and tells him that the row was over a ‘most likely to’ list that someone has posted about students at their school. When Butter clicks on to the list, he discovers that he’s been listed as ‘most likely to have a heart attack’.

Butter’s response to all this is to set up the website ButtersLastMeal.com:

You think I eat a lot now? That’s nothing. Tune in December 31st, when I will stream a live webcast of my last meal. Death row inmates get one. Why shouldn’t I? I can’t take another year in this fat suit, but I can end this year in a bang. If you can stomach it, you’re invited to watch…as I eat myself to death.

Menu to be announced, but I can tell you right now – it ends with one full stick of butter.

The upshot of this is that Butter becomes the most noticed kid in school:

Kids I didn’t know going out of their way to talk to me; kids who I thought hated me risking detention to stick up for me – what’s a guy supposed to do with that?

And, of course, Butter likes the attention – most teenagers would. Not only does he get to be a part of the ‘cool’ crowd at school, he gets to talk to Anna, as himself. But, as an adult reader, we know that some teenagers can be cruel and unthinking. Even Butter comments:

All their laughter and curiosity and encouragement wasn’t completely evil. It was just the result of some teenage sense of immortality mixed with that thing that makes you slow down and watch a car crash, even when you don’t want to look.

Or does Butter say that? It seemed to me that there were a handful of moments where Erica Lange’s authorial voice crept through. That seems a very astute observation for a teenager in the midst of an incredibly emotional time, particularly when there are a couple of revelations at the end of the book that someone as emotionally intelligent as the person revealed in that quote would have spotted much earlier.

However, don’t let that put you off reading the book. It’s very well written, multi-layered narrative that does put you in the position of one of those voyeurs who watch car crashes. You’ll feel grimly compelled to keep reading to discover whether Butter goes through with his last meal even though you know the consequences could be fatal.

Thanks to Faber and Faber for the review copy.